Reflections on Long Island – Part One of Four

Several weeks ago, I joined up with nearly 100 of my golf course architect friends from Europe, Australia and the US for five days of golf, architectural study and camaraderie on some of our country’s finest venues.   Our destination: Long Island, NY. 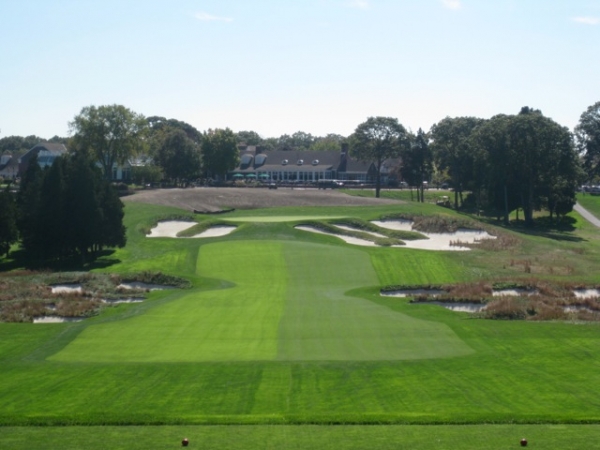 The finishing hole at Bethpage is perhaps a bit more bark than bite, but awfully intimidating for most - and beautiful!

The trip got started at Bethpage State Park – the Black Course.  Now with a U.S. Open under its belt and the recent Barclay’s Championship, the course has tested the world’s best.  What’s most impressive about Bethpage is that such a facility exists – a five-course complex of exceptional golf within a state park – all open to the public with affordable green fees.  Four of the courses were designed by A.W. Tillinghast, a.k.a. the father of American golf course architecture, and they’re all splendid tests.  To further impress, though, is the fact that Bethpage, a daily fee public venue, was given the opportunity to host a US Open… and we learned about that amazing story from Dave Catalano, director of Bethpage State Park.

As for the course, it is impressively beautiful, dramatically bold and mean as an alley cat.  The holes are actually very well routed and creatively pressed into the landscape – just what you would expect from Tillinghast. The bunkers are gaping and cavernous, all lined with deep fescue grasses and command constant respect – seemingly not Tillinghast.  The bunkers do, however respectably accomplish the task of fitting into the scale of the immense corridors, which is sometimes tricky to do.  The result, though, is that they are massively huge, and I doubt that the average player has much chance to escape them. 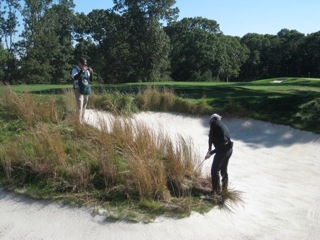 This was a familiar scene.  You're better off if the ball just goes into the sand - recovering from the fescue was impossible.

Most everything about the course, in fact, is BIG – and the scale of the entire property dictates this to be so.  And on the positive side ‘being big” at Bethpage implies that most all of the holes are contained within their own corridors – many are completely framed and isolated from one another.  I think this quality tends to make each hole slightly more memorable as a result. The greens are also quite large, but not overly undulating (they were pretty soft and slow the day we played – so I fear what the course might be like when they are fast and firm!).  And the fairways...well, they’re easily about half as wide as they should be.  You know when you get a big bun with a little skinny hot dog in it?  Well those skinny dogs are the fairways at Bethpage Black.  And unlike the greens and bunkers, the fairways are completely out of scale with the rest of the course and their lack of width makes the course unreasonably difficult.  In some places there is actually 10-15 yards of rough between the fairway and the bunkering (on each side). 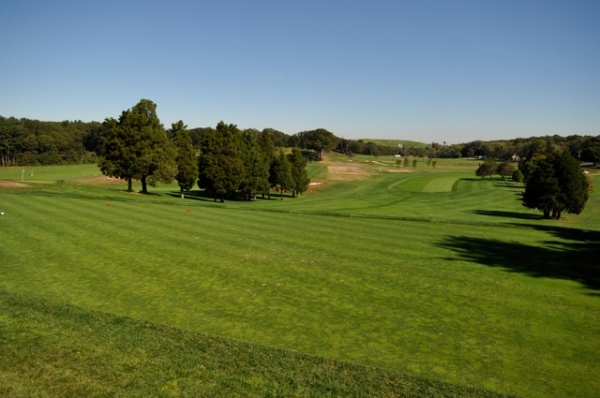 This is the first hole at Bethpage, and likely the worst on the course.  The fairway offers little enticement and is just too narrow!

I have to be honest, there are a lot of really good holes on the course, some great angled fairways and strategic use of the ground.  All the best strategic qualities just seem to be nullified by the narrow, detached fairways and the over-shaped bunkers and penal rough. With a layout as well devised as this one is, the course should afford players with options and strategic angles, which are best realized through ample width.  But sadly, the course does not present itself that way today because of the details (and the desire to make it hard for the pros, I suspect).

My recollection is that most of the par fours were pretty lengthy – the majority were over 400 yards.  And while I’m not a very long player from the tee, (I’m not exactly short, either)… I frequently faced approach shots exceeding 200 yards to elevated greens that were entirely surrounded by deep bunkers – a shot that is all-carry…and usually from the rough (given the extreme narrowness of the fairways).  I missed the strategic angles in the approaches, and open green entries were largely absent.  It was all or nothing – purely heroic golf. 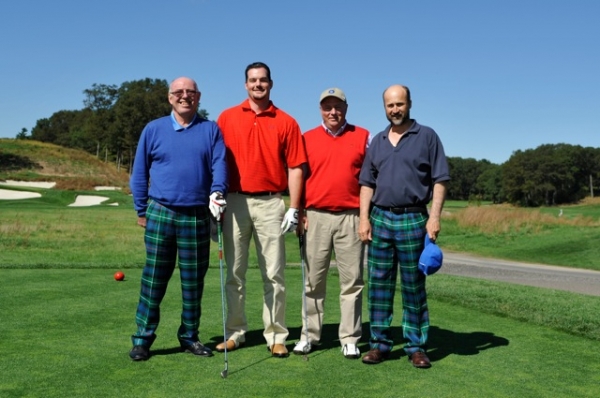 With the par three 17th in the background, our group was all smiles (this was out starting hole)!

Overall, I can appreciate that the Black Course was remade to host an Open and test the best. As a result, it was made to be bold and intimidating and it certainly succeeded.  But, I can’t get over the fact that the rest of us have to endure such a dauntingly difficult course everyday moving forward, as gorgeous as it is.  And the cost of maintenance must be loads more on the Black than the other four combined. 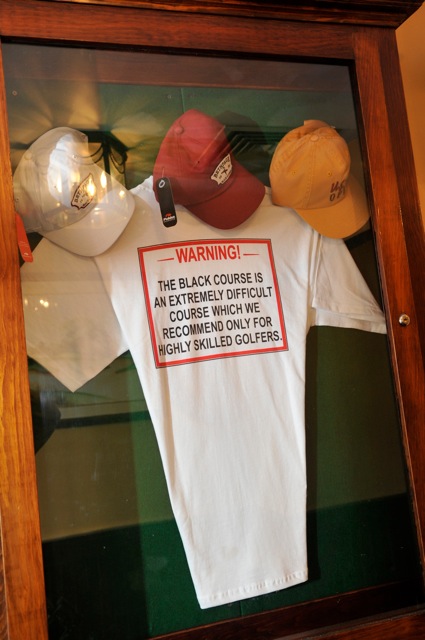 An ominous site to see upon arriving at the clubhouse!

I’m glad to have played Bethpage – Black and thankful for the unique opportunity to experience the course. In fact, it is quite memorable from start to finish, as I can recall all of the holes after just that one round.  But let’s just say that I have now fulfilled that endeavor!  Once is enough for me (though it did provide me with an excellent opportunity to give my new hybrid a good workout)!

A typical piece of objective and scientific analysis by Drew Rogers. Best wishes. Andrew
Comment by Andrew Coutts - posted on 10/21/2012 12:52 am
Very nice assessment of a Beast designed / set up for the 1% ... touring pros competing in Major tournaments. Though strikingly awesome visually, not a good match for many golfers games, and hence enjoyment of the game. Your point on excessive maintenance expense strikes a chord with me as a superintendent .... Lotta Flash gonna cost ya a Lotta Cash. Again, refreshing to read an honestly objective review of a very famous, yet maybe not a "great" course because of it's limited suitability to all golfers. Many famous courses are romantically celebrated because they are Who they are .. generally famous for being sites of numerous, or memorably historic Major Championships. Without this identity, many would simply be extremely difficult, and possibly un-enjoyable, experiences that would be "one & done" on the average golfers list. Though I've never had the opportunity to play it, I sense a course like Merion may be exceptional, with it's "workable" length for the masses. too bad they have to "trick" it up to test the modern pro game. I hear (seriously) a target for the U.S. Open is to have the FAIRWAYS stimping @ 10! Thanks again ... great blog.
Comment by Gerry Casavant - posted on 10/19/2012 09:26 am