There was a collective sigh of relief upon completion of the River Course!  The construction phase would prove to be one of the more challenging our team and contractor (Wadsworth Golf Construction) would ever encounter due to repeated hurricane impacts and associated flooding.

Although the site is dramatically and uniquely situated along the Potomac River, the holes are completely within the floodplain, and the site was essentially flat.  With the assistance of consulting engineers, we devised an earthwork concept that functions like a bathtub.  Lakes were dug throughout the central part of the site to create a home for water and to create enough fill material to build the course features and, more importantly, a protective levee around the entire perimeter of the course.  The levee elevations, like the tees and the greens, were built to withstand a 100-year storm event. Should water ever breach the levee, a pump was also designed and placed on the course to relieve the site from excessive precipitation as well as flooding from the Potomac River and a small tributary called Old Sugarland Run.

Our key design challenges arose when we had to build all the tees and greens at the same elevation (per the 100 year flood) without making them look too contrived or similar and also designing with the water so that it was a varied impact to play throughout the round (water is in play on 10 of 18 holes).  Because the site was wide-open, it is greatly affected by wind – so our design decisions were extremely critical as they related to water.

The overall acreage is also somewhat limited, so every inch of the property needed to be either upland golf  (playable) area or water (to produce enough dirt).  In addition to the flooding challenges, we also encountered wetlands (where fill was not permitted), several large archeological sites and a number of highly sensitive utility easements where excavation or cutting was not permissible.

Paired with the Tom Fazio-designed Island Course, the Club has two excellent, championship caliber courses – both of which are recognized among the very best in the greater D.C. area and in the State of Virginia.  In 2009, the Club was purchased by real estate magnet, Donald Trump, whom Arthur and I partnered with in the ‘90’s for 6 years on a planned golf project in Westchester County, NY.  As a result, I expect the courses to only get better and better. 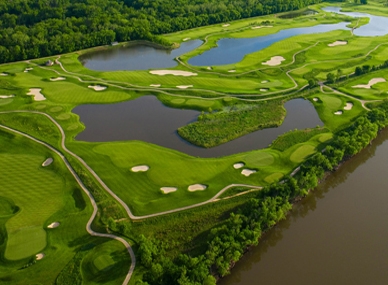 “In all honesty, I can say that I have never worked with any architect more diligent, attentive to detail or responsive to client needs than Drew.”