Caldwell, Ohio - a small village in southeast Ohio near the West Virginia state line.  Caldwell has a population of nearly 2000 people. It's an out-of-the-way place.

In 2010, I was contacted by a small group of enthusiastic business owners in Caldwell who also happen to be rather passionate about the game of golf... and the business of golf as well.

The group had assembled several pieces of land (adjoining parcels) just outside the city limits, along the West fork of Duck Creek, bisected by Interstate 77.  For some, it might not sound like an ideal location for a golf course, but to this group, it is.  In Caldwell, visibility is important - they need you to see them and be willing to drive down that exit ramp to pay them a visit!

We worked with the group to develop a preliminary routing plan (see below) to help them in their due diligence efforts and to determine feasibility of their site - to be developed into an 18-hole golf course.  Acreage was limited (roughly 102 acres), but we managed a workable arrangement of 18 holes - and a practice area!  It’s actually a nice study of what can be done even on a small piece of constrained property.

The course planning has not advanced beyind our initial efforts to my knowledge, but maybe someday Dudley Station will become a reality and a 'must stop and play' opportunity in Caldwell. 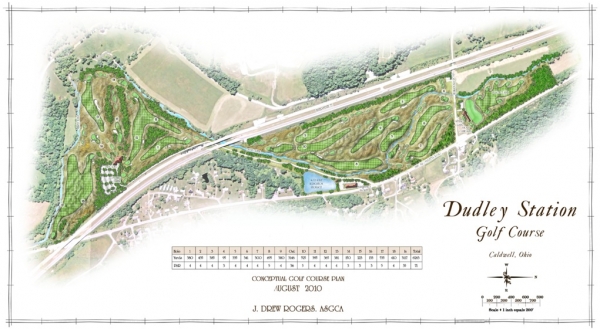